UPDATE 3: The Ultimate Objective Exchange Shop has been reopened, and will remain open until Thursday, September 10th.

UPDATE 2: While the Ultimate Objective Event has ended, we're going to be keeping the Ticket Store active for another week, to make sure you have time to pick up your rewards! You'll have until the maintenance on Wednesday, August 19th to redeem your tickets.

UPDATE: The Race to 90 Event has been extended by six days! It will now end at midnight on Tuesday, August 18th, so enjoy the extra chance at these exclusive titles!

Are you ready for Level 90? Hope so, because this is your only chance to claim some exclusive titles, but only if you're able to make it in time! If you're still trying to reach the Season 3 battle quests, we're putting on a special weekend event, tailor made for those that are on the way to hitting level 80, and special prizes if the entire Vindictus Community can band together and take out the enemy! There's even more events below, so take a look and join the battle!

The Level Cap has been lifted to 90, which brings forth the obvious question: Who can hit the new level cap first? We have three special titles available, from now until August 18th, but some are going to be a lot harder to get than the others...

First off, all players that reach Level 90 before the end of the event will receive the "Closer to the Gods title". It might not be flashy, but it's going to take you some effort in order to hit that. But why stop there when you can claim the "Ninety Non-Problems" title, by getting a second character up to Level 90? That title will be awarded to all the level 90 characters on your account, great for bragging rights.

But the real prize will be the "90 MPH" title. This special title will only be awarded to 9 characters: The ones that reached Level 90 first in the class. Time will be tight, the challenge will be significant, so if you're up for this challenge, grab your friends and get to it!

From now through August 13th, we're unleashing a new set of challenges for you, but there's a special twist to them: You're not just fighting for yourself this time, you're fighting for the entire server.

In the Event Section, there are two new sections. The new Ultimate Objective Event section details a list of daily Objectives to complete, be it defeating bosses or completing Battle Quests. Whenever the server as a whole completes these challenges, everyone that helped contribute to the Objective, and anyone else logged on at the time, will be rewarded with a number of Ultimate Objective Packages. 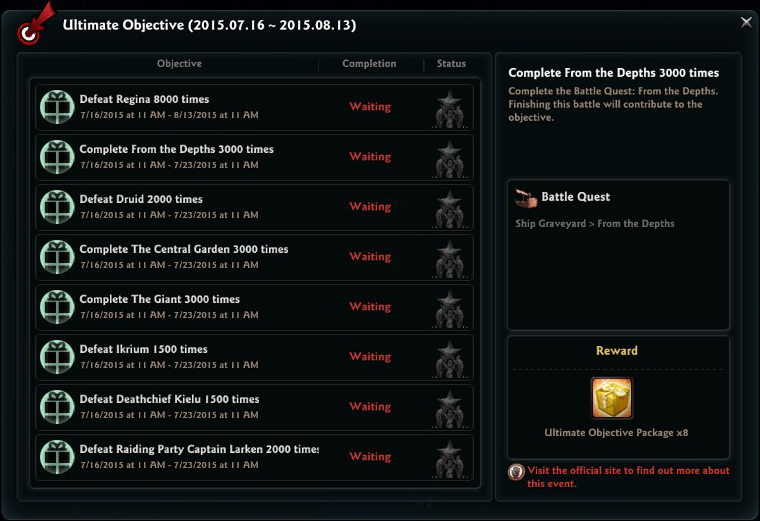 When opened, Ultimate Objective Packages will reward you with an Ultimate Objective Footprint Ticket and Merc Potions, Goddess Graces or Dye Ampoules. Gather enough tickets, and you'll be able to take them to the Exchange Shop and purchase special Enchant scrolls, a Max Awakening Increase Potion, exclusive Regina Emblems or the new Chef Outfitter! 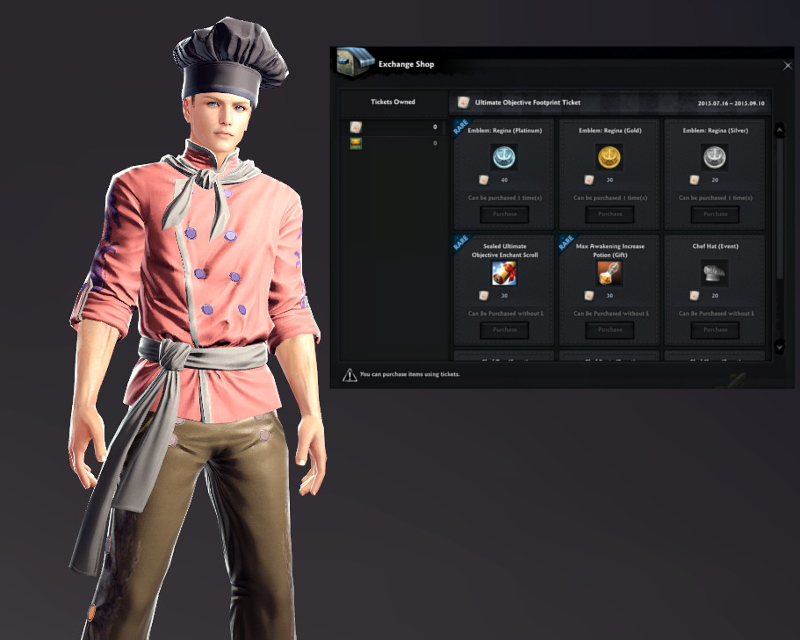 Help complete every Challenge, and you'll be able to earn up to 188 Ultimate Objective Footprint Tickets, not to mention the massive pile of Potions, Graces and Ampoules!

Not quite ready for Season 3 yet? No problem, for the next three weekends, we're going to give you a leg-up to help you get there! For the weekends starting July 17th, July 24th and July 31st, characters between levels 30 and 79 will receive +100% EXP between 3:00 and 8:00 PM PDT each day of the weekend!

Want more than XP, or already above level 80? There's still something for you here, because from 12:00 to 3:00 PM PDT on the weekends, all characters, regardless of level, will earn double AP! Carry on the good fight, because the battles of Season 3 await!

Want to hone your skills against Vindictus' newest boss? Regina's ready to fight, and we're giving you an extra shot at her! From now until August 13th, you'll be allowed an extra attempt at defeating Regina each day, so grab a sword and try not to get killed!

New players still have over a month left to join in with the Enlistment Bonus Event! 28 days of free login rewards, just for starting out your journey in the world of Vindictus! You can check out the full details in the Fancy Footwork Event post. 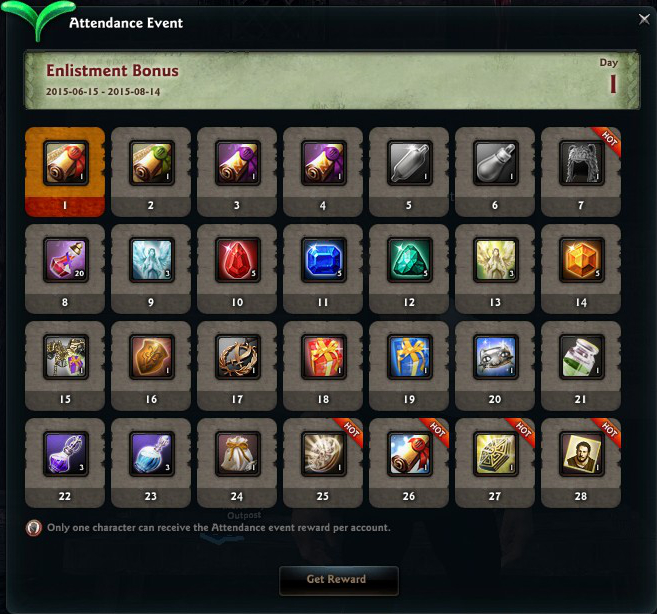 We hope you enjoy everything that comes with the first full Episode of Season 3, and claim your just rewards!