The Evie Revamp Update might be focused on Evie, but that's not keeping us from making sure every Merc has plenty to do. The new Daily Missions are kicking off with a bang, we're giving you another good reason to bring your friends to the battlefield, and we're making sure all the new Evies to come have a leg up in the leveling curve!

The Evie Revamp has arrived, and everyone's favorite pint-sized sorceress has a slew of new toys to play with, and we're giving everyone a reason to give her a try! From now through September 1st, from 5:00 to 9:00 PM every day, Evie will gain an additional +100% EXP and +100% AP from Battle Quests, doubling her leveling speed and power gain for each four hour window!

Remember, this only will affect Evie, so give her a try if you haven't yet, and take advantage to power her up as high as you can!

The Daily Missions are here to stay, but we want to kick them off with a bang and give you a chance for some major prizes for the next four weeks! From now through September 16th, completing all the Daily Missions for a day will reward you with two Daily Mission Event Tickets, which can be turned in for a variety of rare Helmets, Hats and NX items, including Dye Ampoules, Merc Recovery Potions, Premium Armor Fusion Runes and even Enhancement Runes! 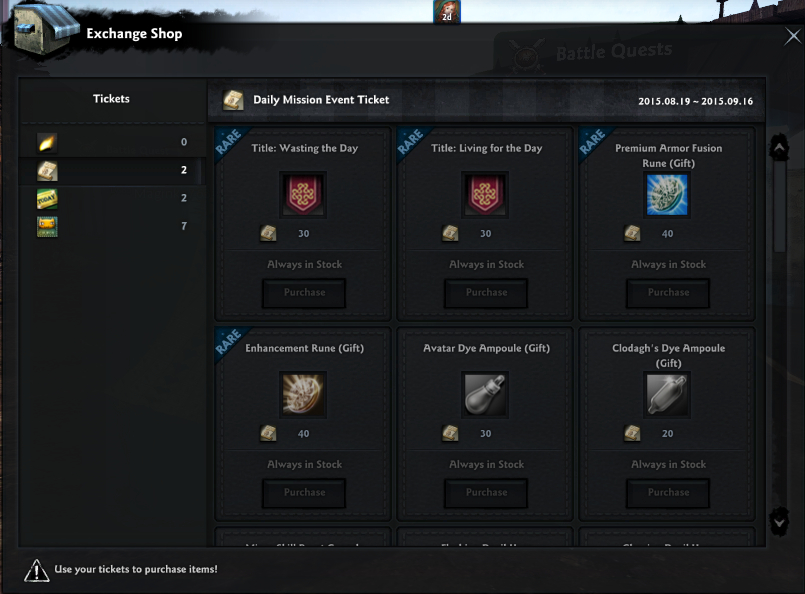 Even the finest warriors would rather brave the slopes of Ben Chenner with a few talented friends to watch their back, and now's the best time to find some to give you a hand! From now through September 27th, partying up with members of your guild will grant everyone special bonuses, including more raw power, better SP generation and hardier armor! This applies to all battle quests, be they regular runs, guantlets or raids, and the effects get more and more powerful as more friends join the fight!